Green (The Flintstones)
Taupe-brown ("The Pebbles and Bamm-Bamm Show")

"The Gruesomes" (The Flintstones)

Weirdly and his family were the first attempt at giving the Flintstones' a spooky neighboring family to take advantage of the reinvigorated monster craze caused by The Addams Family, The Munsters and the classic monster films by Hammer and Universal Studios, with Weirdly himself drawing many similarities from Gomez Addams.

Weirdly is an unusual and creepy man on first impression, but he is actually quite friendly and jovial.

Weirdly is a short individual who, like the rest of his family, is a green-skinned humanoid being similar in nature to a goblin. Weirdly also has green hair that covers his eyes, rather hairy arms, fangs and a small mustache and he wears a purple loin-cloth. In the final episode, "The Birthday Present" from The Pebbles and Bamm-Bamm Show, he has taupe-brown hair, grayish-tan skin and wears a brown loin-cloth.

Weirdly and his family in a coloring book. 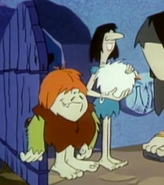 Creepella and her husband, Weirdly as the Ghoulstones from "Fred and Barney Meet the Frankenstones" from The Flintstone Comedy Show.
Add a photo to this gallery

Retrieved from "https://flintstones.fandom.com/wiki/Weirdly_Gruesome?oldid=24133"
Community content is available under CC-BY-SA unless otherwise noted.