Start a Wiki
The Rubble Family is one of the many families in Bedrock and also the main fictional characters of the original series and franchise, The Flintstones.

The Rubble family consists of couple, wife Betty Rubble, daughter of Brick and Jean McBricker and husband Barney Rubble, son of their parents Robert "Bob" and Flo Slate Rubble, their younger son, Dustin "Dusty" Rubble, and their adopted son, Bamm-Bamm Rubble which he was now married to Pebbles Flintstone with fraternal twins, Chip and Roxy Rubble. 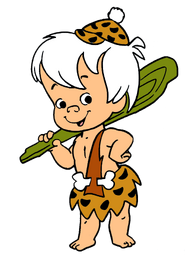 Mrs. Slate (aunt)
Add a photo to this gallery
Retrieved from "https://flintstones.fandom.com/wiki/The_Rubble_Family?oldid=15271"
Community content is available under CC-BY-SA unless otherwise noted.