The Gruesomes are a monstrous but friendly family of recurring characters who appeared on the original series, The Flintstones. They debuted in 1964 in the episode of the fifth season, "The Gruesomes" during the show's run.

Inspired by a previous Hanna-Barbera monster family, Mr. & Mrs. J. Evil Scientist, the Gruesomes are a family consisting of married couple, Weirdly and Creepella, their son Goblin (a.k.a. Gobby), and Uncle Ghastly (who is only seen as a hand coming out of the well in "The Hatrocks and the Gruesomes" and a shadow in "Meet the Gruesomes"). They are portrayed as being the stars of their own reality TV show.

They first appear in an episode of The Flintstones titled "The Gruesomes" as well as in the children's novelization of the episode. In this episode, Weirdly and Creepella Gruesome (voiced by Howard Morris and Naomi Lewis), along with their son Gobby, move into Tombstone Manor which is next door to the Flintstones. Trying to be neighborly, Fred and Barney agree to babysit Gobby, whose strange pets (including Schneider the spidersaurus and Occy the octopus) make for a tortuously eventful evening. Originally the Flintstones were very disturbed by the Gruesomes and their antics, but when Fred and his friend Barney found out that the Gruesomes were the stars of their own reality TV show, they immediately dropped any apprehensions they had about the family and desperately wanted to be featured on their show.

The family reappears in the episode "The Hatrocks and the Gruesomes". The Hatrocks, who are hillbilly friends of Fred, come to visit but soon become an annoyance to everyone. Fred enlists the Gruesomes to scare them away, but they are unsuccessful, because the Hatrocks are immune with horror. Fred finally discovers The Hatrocks' aversion to rock music, and uses it to chase them back to the hills. This episode is notable because Fred, Wilma, Barney, Betty, Pebbles, Bamm-Bamm, Dino, Hoppy and the Gruesomes sing "She Said Yeah Yeah Yeah", which is a takeoff of The Beatles' song "She Loves You".

In 1966, the Gruesomes would star on the cover of the HBR album song Monster Shindig alongside Super Snooper and Blabber Mouse, as well as caricatures of Dracula, Frankenstein and the Wolf Man. The song also appeared on other HB records when a cuddly character turned on a radio or entered a nightclub.

After The Flintstones ended, the Gruesomes returned for one appearance on The Pebbles and Bamm-Bamm Show in 1971 with Weirdly Gruesome voiced by Don Messick and Creepella Gruesome voiced by Jean Vander Pyl. In the episode "The Birthday Present", Wooly (Pebbles' elephantine prehistoric pet, presumably a woolly mammoth or a mastodon) takes the gift that Pebbles had bought for her mom and buries it in the back yard. Pebbles believes it is stolen by her neighbor the creepy Mrs. Gruesome, so she offers to babysit Gobby for the Gruesomes so that the kids can infiltrate the Gruesome mansion and search for the gift. Thinking that Mrs. Gruesome may have Wilma's gift with her, the gang then crashes a Gruesome family reunion, and Bamm-Bamm is mistaken for a cat burglar. The misunderstanding is cleared in the end and per her mother's birthday wish, Pebbles vows to judge people more fairly. Despite this episode taking place during Pebbles' teen years, Gobby has not aged a bit since Pebbles' infancy.

The Gruesomes were replaced in later spin-off shows and future media by The Frankenstones, another monster-themed family who move next door to the Flintstones. However, Weirdly and Creepella made their last animated appearance in The New Fred and Barney Show episode "Fred and Barney Meet the Frankenstones" where they were referred to as the "Ghoulstones" and were shown to now be residing at the Frankenstone's condominium, the Deadrock Arms Condorstonium. However since this episode took place during Pebbles' infancy, the Ghoulstones may simply be lookalikes or distant relatives of the Gruesomes, which seems to be likely as their son "Junior" here is portrayed as a furry spider-like creature.

Despite this, the Gruesomes made one last appearance in the twenty-second issue of the 1995 comic run of The Flintstones by Archie Comics, however their appearance here was just an adaptation of their debut in the original series.

Originally the family were depicted as green-skinned goblin-like beings, with the exception of their son who had blue skin.

In a further lapse in continuity from their prior appearances on The Flintstones, Gobby is still depicted as a child on The Pebbles and Bamm-Bamm Show and has not grown into a teenager, even though he was depicted as a couple years older than Pebbles and Bamm-Bamm during the family's original appearances. Additionally, Pebbles perceives the family as scary and untrustworthy, even though they had previously been depicted as strange but harmless friends of the Flintstones and Rubbles. 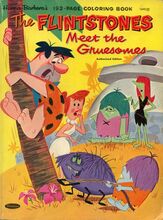 Retrieved from "https://flintstones.fandom.com/wiki/The_Gruesome_Family?oldid=25734"
Community content is available under CC-BY-SA unless otherwise noted.