Ever since The Flintstones became the first prime-time animated TV program thirty years ago, young and old alike have enjoyed these unique stories of daily life in the Modern Stone Age. And no one knows more about prehistoric cutting edge technology than the citizens of Bedrock. From the moment their trusty Bird-bell alarm clocks lets loose in the morning to when it's time to switch off the Eel-powered porch lights at the end of the day, Bedrockians keep life running smoothly through their off-the-wall, wacky inventions.

Fred Flintstone starts his day with a refreshing woolly mammoth shower, then it's on to breakfast, where the Dino-egg-beater, the Javasaurus coffee-maker, and the Drago-toaster ease him and his wife, Wilma into a typical low-stress Bedrock day. Well fed, he is out the door even before the family's doorbell wakes and is on his way to work at Mr. Slate's quarry. The term "heavy-equipment" takes on new meaning when Fred gets his Tyrannosaura-crane and Tricera-dozer moving. In Mr. Slate's office, the Dictabird keeps a permanent record of everything he dictates, and razor-sharp bird beaks chisel laser-quality letters.

Back home, Wilma and her best friend, Betty tidy up after breakfast, tossing the scraps down the Stego-sposal, collecting laundry for the Pelican clothes washer, and running the Masto-vacuum over the rugs. In the evening, Fred and Barney takes the girls out to the Bedrock Bowl-a-Rama, where everything from the pinsetter to the popcorn popper has a mind of its own, and then it's finally time to put out the saber-tooth house cat and say goodnight. It's been another busy day and everyone needs a rest—including all those wacky inventions! 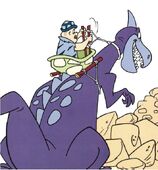 A Super Bumble Bee Buzzer with a beeasaurus.
Add a photo to this gallery
Retrieved from "https://flintstones.fandom.com/wiki/The_Flintstones%27_Wacky_Inventions?oldid=14542"
Community content is available under CC-BY-SA unless otherwise noted.