Stegosauruses are a species of large dinosaurs which existed during the Stone Age featured in the franchise of The Flintstones. While not as common as brontosauruses and pterodactyls they were still one of the more prominently mentioned dinosaurs in the show and with almost as many uses as the first two despite its infrequent appearances.

Stegosauruses were large dinosaurs, although they were nowhere near as large as brontosauruses, with most stegosauruses being only almost as large as a bus or as large as a caveman. They usually had green, red or blue skin colors. Unlike other animals, they were never seen talking and their behavior was more like that of a modern domesticated horse, however wild stegosaurus were more wild and erratic like a wild horse.

Stegosauruses would occasionally be used for transport, either as emergency vehicles like fire trucks or as steeds that were treated like horses by riders, making them similar to broncosauruses. Stegosauruses would occasionally be used in construction, as either dump trucks or as rock crushers. However even this kind of usage was rare and stegosauruses were mostly used as a food source, usually as a substitute for brontosaurus meat, with stegosaurus ribs, roasts and sandwiches being fairly popular, but still not as common as bronto meat.

Despite the lack of uses for bigger stegosauruses, there existed miniature breeds of stegosauruses which actually saw regular use, specifically as "Dino-Mower" lawnmowers which were essential for gardening. However even these stegosaurus mower models weren't full proof due to their dislike of crab grass and their vulnerable teeth, which occasionally led to them being replaced with crab-o-mowers, lobst-o-mowers or the completely mechanized "Super Power Lawnmower". Even small snorkasaurus breeds could substitute them as seen in "Kleptomaniac Pebbles".

There was also an even smaller and more peculiar breed of stegosaurus that was used as a food processor called a Stegosaurus Cuisinrock that was first identified as a stegosaurus in The Flintstones' Wacky Inventions. Unlike other stegosauruses, it had no plates on its back, just ridges like other kinds of dinosaurs and its head was larger than its body and resembled that of a tyrannosaurus. But its peculiar appearance aside, its small size was perfect for its job. It cuts, it chops, it slices, it dices and minces, making it a great dino-appliance for any modern Stone Age kitchen.

The Stegosaurus Fire Dino from the first intro of the two seasons (plus two episodes of the third season).

A stegosaurus dump truck from "The Swimming Pool". 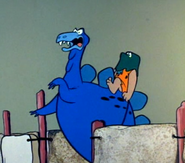 A stegosaurus from a Flintstones Ed-U-Card.

The stegosaurus punch clock from the 1994 film.

A stegosaurus ride in a coloring book. 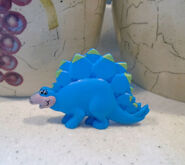 Wild dinosaurs on a rampage.

A stego-sposal from the episode, "Ladies' Night at the Lodge".
Add a photo to this gallery

Peanut Butter and Stegosaurus sandwich in "In the Dough".

Roast leg of Stegosaurus with French fried cactus rings in "The Hero".

Mastodon Meatballs, Stegosaurus Sautees and Fossil Fricassee from Hollyrock-a-Bye Baby.
Add a photo to this gallery

Retrieved from "https://flintstones.fandom.com/wiki/Stegosaurus?oldid=13293"
Community content is available under CC-BY-SA unless otherwise noted.