Sea Serpents (also called Sea Monsters) are a species of giant aquatic dinosaurs which existed during the Stone Age featured in the franchise of The Flintstones. They were pretty rare and some cavemen even doubted their existence.

Sea Serpents were gigantic dinosaurs resembling brontosauruses in both shape and size, but unlike brontos they were amphibious, living only in the ocean and they were carnivorous, even eating brontosaurus meat. They came in a large assortment of colors and forms, with some having feet like a bronto, others having flippers (making them resemble real life plesiosauruses or pilosauruses) or no feet or flippers at all.

Because of their wild nature and the many uncharted waters of the modern Stone Age, sea serpents were not often tamed and rarely used for food or appliances, if at all.

There existed an unnamed fresh water variant of aquatic serpent which unlike their salt water counterparts were more friendly and completely serpent-like while having round stegosaurus-like slabs on their backs. They were mostly orange in color. A few tended to make their homes almost anywhere, even golf course ponds as seen in "The Golf Champion".

A pilosaurus-like sea serpent from "Divided We Sail".

Fresh water serpents in the 1994 film. 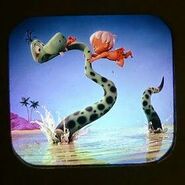 Bamm-Bamm wrestling with a sea serpent in the Flintstones View Master. 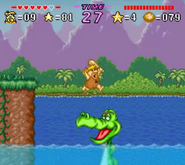 A sea serpent from The Flintstones: The Treasure of Sierra Madrock.
Add a photo to this gallery
Retrieved from "https://flintstones.fandom.com/wiki/Sea_Serpent?oldid=12248"
Community content is available under CC-BY-SA unless otherwise noted.