Saber-Tooth Bears (also called Bearasauruses) are a species of prehistoric bears which existed during the Stone Age featured in the franchise of The Flintstones.

They mostly resembled regular bears with brown fur except that they had large fangs like those of a saber-tooth cat. Others though were far larger and had blue and purple skin with dinosaur-like spots on their backs. They were quite dangerous and mainly lived in forests, often antagonizing campers.

Fred had several incidents with these troublesome creatures in both the original show and The Flintstone Comedy Show. 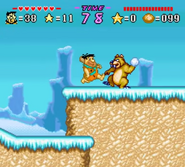 A saber-tooth bear from The Flintstones: The Treasure of Sierra Madrock.
Add a photo to this gallery

Retrieved from "https://flintstones.fandom.com/wiki/Saber-Toothed_Bear?oldid=12246"
Community content is available under CC-BY-SA unless otherwise noted.