Parasaurolophuses (also simply called Parasauruses) are species of crested dinosaurs which existed during the Stone Age featured in the franchise of The Flintstones.

Parasaurs were large bipedal dinosaurs (although they could walk on all fours when used as automobiles) with stair-like ridges on their backs, crested heads and beak-like mouths, making their heads resemble those of a pterodactyl. 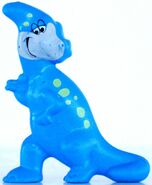 A color-changing paralasaurolophus toy variant found inside Post Fruity/Cocoa Pebbles cereal boxes.
Add a photo to this gallery
Retrieved from "https://flintstones.fandom.com/wiki/Parasaurus?oldid=12262"
Community content is available under CC-BY-SA unless otherwise noted.