Mr. Slate (known in earlier episodes as J.J. Granite or Mr. Rockhead) is Fred's boss at the Bedrock Quarrel and Gravel Company (later known as Slate Rock and Gravel Company) and a fictional character of the original series, The Flintstones and the rest of the franchise.

Mr. Slate is austere, strict, no-nonsense, serious, negative and hot-tempered. He often is not impressed by Fred's antics and amateurish blunders and often fires him only to give him his job back in the end.

He is a tall and stout caveman with fair skin, tan stubbles, black beady eyes and is nearly bald, having only two hair strands on his head, and wears a pair of black glasses with circular lenses. He wears a loin-cloth with a tie in various colors which hangs down to his knees. When he was a kid, known as Nate Slate from The Flintstone Kids, he had blonde hair.

In the 1994 film, Mr. Slate is still the owner of the company, but has a minor role in the film. His villainous Executive Vice President, Cliff Vandercave, concocts a plan to build faulty machinery to quadruple the company's profits but which will fall apart after Cliff has stolen Slate's money and fled the country. Cliff makes Fred Flintstone the Vice President of the company and tricks him into firing all the workers, framing him for embezzlement. Slate's reaction to this is unknown, and it is also not known whether it is he who calls the police to pursue Fred.

At the end, when Cliff is defeated and trapped in concrete, Slate congratulates Fred for "ending the Stone Age" and attempts to promote him to President of the company's concrete division, but Fred, happy with his own job, politely declines, and requests his old job back, along with two weeks holiday. Slate accepts, and his last line is "There goes the best executive I ever had." 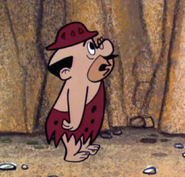 Mr. Slate's design during the first episodes of season 2.

Community content is available under CC-BY-SA unless otherwise noted.