Mammoths (also called Woolly Mammoths or Mastodons) are species of trunked mammals which existed during the Stone Age featured in the franchise of The Flintstones and were quite possibly one its most important and recurring animals, alongside the Brontosaurus.

Mammoths were large burly animals with a long trunk nose, big ears and a shaggy coat of fur, hence the name "Woolly Mammoth", although some had a little less shaggier fur than others. Most mammoths also sported two tusks of varying sizes. They also came in a wide assortment of colors, ranging from brown, gray, purple, red, blue, purple and even the rare green. Most mammoths were intelligent enough to speak either among themselves or to cavemen, while others were no smarter than any ordinary animal.

They were quite possibly the most useful animal of the Stone Age, having almost unlimited uses for cavemen in all things like work, daily life, transportation, for sustenance or even as pets, in fact the only thing they couldn't do was fly.

The most notable mammoth character was Wooly, Pebbles Flintstone's pet woolly mammoth from The Pebbles and Bamm-Bamm Show. 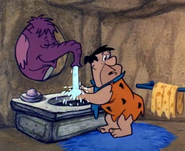 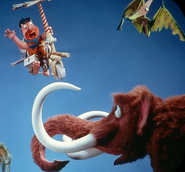 A mammoth and a pterodactyl in the Flintstones View Master.

A woolly mammoth from a Flintstones Ed-U-Card.

A mammoth in a Post Pebbles ad in The Flintstones and the Jetsons.
Add a photo to this gallery 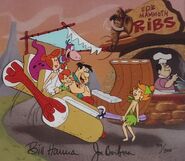 Mammoth Ribs on an autographed card.

Mastodon Meatballs, Stegosaurus Sautees and Fossil Fricassee from Hollyrock-a-Bye Baby.
Add a photo to this gallery
Retrieved from "https://flintstones.fandom.com/wiki/Mammoth?oldid=11913"
Community content is available under CC-BY-SA unless otherwise noted.