Dodo Birds are species of plump flightless birds which existed during the Stone Age featured in the franchise of The Flintstones. They were an important part of the Stone Age diet among cavemen and were harvested for their meat and eggs and were also a target for avid wild game hunters.

Dodos were plump fat birds with large curved yellow beaks. They came in at least two known sizes, with some Dodos being only half the size of a caveman while others were gigantic and almost as big as a prehistoric log plane. Giant Dodos also had crests like a pterodactyl and the ability to fly, although they tired out easily. Smaller Dodos were a bit smarter and the tips of their beaks were colored red. Dodos came in a variety of colors, such as blue, purple and red.

Unlike other prehistoric animals, dodos had little use as appliances and were only used as food.

Dodos were mainly bred and hunted for their drumsticks and their eggs, which could come in a large variety of sizes, from the size of a caveman's head to the size of a caveman's whole body, making dodo eggs a truly scrumptious and filling food. Although, dodo products could be substituted with chickenasaurus and pterodactyl products (although pterodactyl drumsticks and roasts were more popular). The varying sizes of a Dodo allowed for their meat and eggs to come in a variety of sizes, truly making them the ultimate and versatile poultry dish, and unlike pterodactyls, cooking time for dodo eggs was far less strenuous, only taking around 3 hours to boil unlike a pterodactyl egg which could take a whole day or more.

There existed a smaller and more dimwitted breed of purple dodo bird called a Doozy Dodo, which looked much like regular dodos but with no colored tips on their beaks, black tail feathers and a black ruff around their necks. They were unique in that they were capable of speech much like a parrot, although they were not as intelligent as prehistoric parrots, although they could make for decent loud speakers.

Fred and Wilma briefly acquired one such bird in "The Buffalo Convention" who Wilma simply called "Doozy" and who caused Fred no end of grief, forcing him to try and get rid of the bird by any means necessary but somehow kept returning to ruin his day.

A soft-boiled dodo egg in "The Prowler". 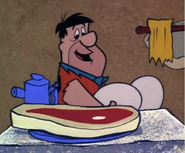 Barney in a giant dodo egg in "Little Bamm-Bamm".

Ruined Dodo Bird Roast in the sixth issue of the 1977 comics.

Fred and Barney with a small hard-boiled dodo egg in the 1994 film.

Dodo Egg yolk in the film.

Fred tasting a dodo bird fricassee in the episode, "The Happy Household".

A blue dodo bird in "Invasion of the Trendsetters" from Yabba-Dabba Dinosaurs.
Add a photo to this gallery

Retrieved from "https://flintstones.fandom.com/wiki/Dodo_Bird?oldid=21383"
Community content is available under CC-BY-SA unless otherwise noted.