Cowasauruses (also called Cattlesauruses and Beefasauruses, or Bullasauruses in the case of large males) are species of cow-like creatures which existed during the Stone Age featured in the franchise of The Flintstones. They existed only in Texarock where they were kept as domesticated farm animals.

Cowasauruses were much like cows but had shaggy coats like those of a woolly mammoth, spiky ridges on their backs like some dinosaurs and longer and pointier horns with ring-patterns. Cowasaurus were only bred and kept in Texarock, primarily by Fred Flintstone's rich uncle Tex Hardrock who made a fortune with his cattle ranch.

Cowasauruses were mainly used for their hides, meat and for decoration. However they were not a common part of cavemen diets, with brontosauruses instead being the primary food source for meat products across the Stone Age, however cowasaurus beef and burgers did exist but were notably rare. Milk was also not popularly harvested from them, with mammoth milk being the milk of choice for cavefolk. The male counterpart of the cowasauruses, Bullasauruses were an even rarer sight, and rodeo shows would instead use triceratopses instead of bullasauruses. As such, bullasauruses were more commonly harvested for their horns and hides if nothing else.

A mounted bullasaurus head in "Deep in the Heart of Texarock".

A purple bullasaurus in "Fred's Big Brag" from The Flintstone Comedy Hour.

Tex and a male longhorn in the sixth issue of the 1977 comics. 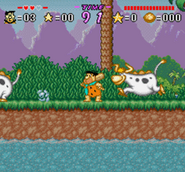 A cowasaurus stampede in The Flintstones: The Treasure of Sierra Madrock.

A pink cowasaurus from The Flintstones Bedtime Storybook.

A steeradocus from "The Grass is Always Dinner".
Add a photo to this gallery
Retrieved from "https://flintstones.fandom.com/wiki/Cowasaurus?oldid=22066"
Community content is available under CC-BY-SA unless otherwise noted.