Alan Reed (born Herbert Theodore Bergman; August 20, 1907 – June 14, 1977) was an American actor and voice actor, best known as the first voice of Fred Flintstone in the original series, The Flintstones and its' spin-offs.

In 1960, he began the voice role for which he was most famous, that of Fred Flintstone, the lead character of Hanna-Barbera's prime-time animated series, The Flintstones. Reed provided Fred's voice for the entire six-season run of the show, as well as in several spin-off series (The Pebbles and Bamm-Bamm Show, The Flintstone Comedy Hour) and specials. His final performance as Fred Flintstone was a cameo guest role on an episode of Scooby's All-Star Laff-A-Lympics.

Since Reed's death, his role was succeeded by Henry Corden, who was also the singing voice in The Man Called Flintstone and also his speaking voices of Fred in various spin-off series, specials and commercials. 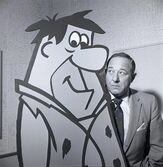 Alan Reed and Sally Struthers with Pebbles and her father, Fred dancing from a publicity cel of The Pebbles and Bamm-Bamm Show.
Community content is available under CC-BY-SA unless otherwise noted.
Advertisement